Long ago, in a place of tranquility, we met the troubadours of peace and gathered in the halls of Discovery, waiting for the day that they would be called forth to sing of our humanity. Our great souls and the potentiality of every living being began there for me. Among the newly anointed was one Ritchie Havens, he will always be in the ethers of time a true Ambassador of Peace. I was only seventeen at the time and unable to travel to the great Woodstock event that marked and led forever the possibility of great numbers gathered together harmoniously without trouble, sharing, caring for each other and truly exampling the best of the human spirit.

I did however go on to be part of other great gatherings, The very first rainbow festival in Colorado. The first Rainbow Gathering of the Tribes, a four-day event in Colorado in July 1972, was organized by youth counterculture “tribes” based in Northern California and the Pacific Northwest. Twenty thousand people faced police roadblocks, threatened civil disobedience, and were allowed onto National Forest land. 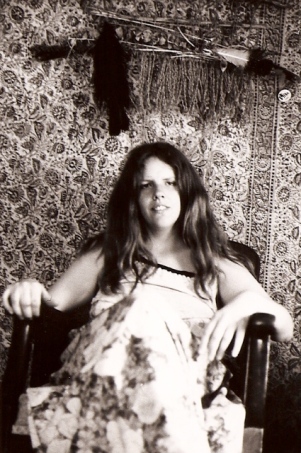 My friend Roxann or as we called her back then, Roxio, baked bread in a wood stove at the first gathering in Colorado. (Photo by Richard Nelson)

My friend, Bobbie Bumper, guided people up the mountain to the camp sites.

Both of these amazing women traveled the country and the world, and taught me how to play the guitar.

Rainbow Spirit The Heart of Fire

The SONGBOOK of Culture Magic is here

The home of authors Sarah Fischer and Kelsey McKnight

CAROLINE JUSKUS WRITES ABOUT THE LIVES, HOMES AND STUDIOS OF ARTISTS AND CREATIVES

I AM therefore I Write. Official site of Marie A Bailey, writer, knitter, and stray cat magnet.

For Writers in the Mist and Dreamers in the Dance